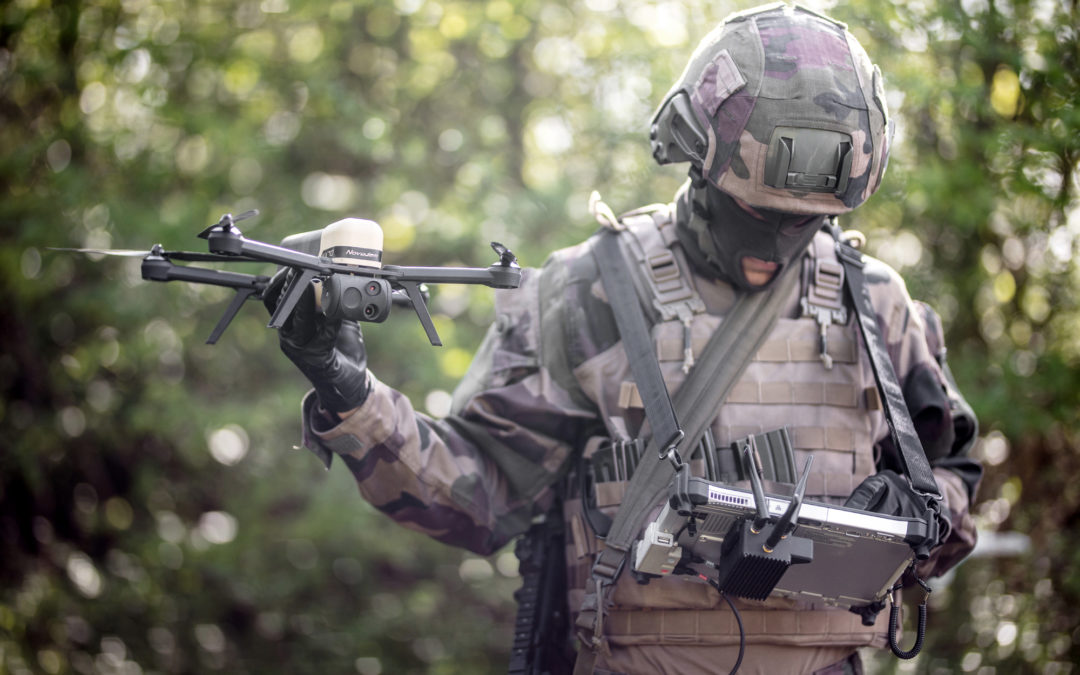 Less than a year after having projected the first NX70 micro-drones from Novadem in external operations (OPEX), the DGA (French Defense Procurement Agency) placed a new order with the company to double its fleet. This new acquisition thus brings the NX70 fleet to more than 100 drones available to support the operations of the French forces.

Aix-en-Provence-based company Novadem has received a new order from the French Defense Procurement Agency (DGA) for 20 NX70 micro-drone systems and associated equipment (one system consists of two drones). This order is in addition to the one placed at the end of 2018, bringing the total acquisition to more than 4 million euros for equipment and multi-year maintenance. In addition to drones, other peripheral equipment providing added value to the systems has been retained, such as “tethered solution to fly several hours continuously or even RVT (remote video terminal) which allows personnel on the ground to benefit from the video and cartographic feedback of the drone and thus share a global vision of the situation ”, specifies Pascal Zunino, President of Novadem.

This acquisition is a continuation of the first order placed in December 2018 which, as a reminder, had been processed by the DGA in an operational emergency in order to quickly equip soldiers in OPEX (external operation) with detection capabilities that are efficient, secure and capable of operating day and night. The Army General Staff had issued a request in October 2018 to acquire micro-drones. The Novadem NX70 drone was then chosen by the DGA and the Army to match the requirements.

“The Land Army is proud to have chosen the NX70 which is perfectly met its need by its inherent performances than by its encrypted data links. The drone is already participating to the protection and the superiority of our involved units in external operations thanks to immediate projection. This is the proof of a real need, its excellence and reliability.”

In overall, more than 100 drones will be deployed for the French forces. The half of the delivery took place on last April, organized by the French Defense Procurement Agency (DGA). These NX70 will be immediately projected in external operations to be added to the others drones already on site. The global order will be completed by the end of the summer.

The second generation of NX70

Since 2016, the NX70 has evolved over the years and from RETEX users to arrive in its latest version, NX70 “Block 2”. A 1kg micro-drone, the NX70 has a flight range of up to 45 minutes and a range of up to 5 kilometers. The NX70 can fly in difficult weather conditions (wind up to 65 km/h, rain, dust, higher temperature range) ensuring a high availability rate. Its data links are encrypted and specific to military needs; no information is stored onboard the drone and no internet connection is required to operate the equipment, thus limiting any risk of compromise. Beyond its day and night detection and recognition capabilities, the NX70 can be equipped with extended capabilities allowing it, for example, to perform observation missions lasting several hours thanks to its power supply device from the ground via a cable or to carry additional releasable devices such as a medical kit, smoke detector, etc. Its hardened steering interface is compatible with formats for maps and coordinates in the defense sector.

“It is with great pride that we have received this additional order, further proof of the confidence that the DGA and the French Armed Forces have in Novadem. The second generation of the NX70 meets the expectations of the ground forces in the difficult environment of the Sahel region. With the label “Combat proven” and the doubling of the fleet of NX70 deployed, we are taking a new step in our development which opens up promising prospects for us internationally »,

More details on the NX70
Tweets by NOVADEM